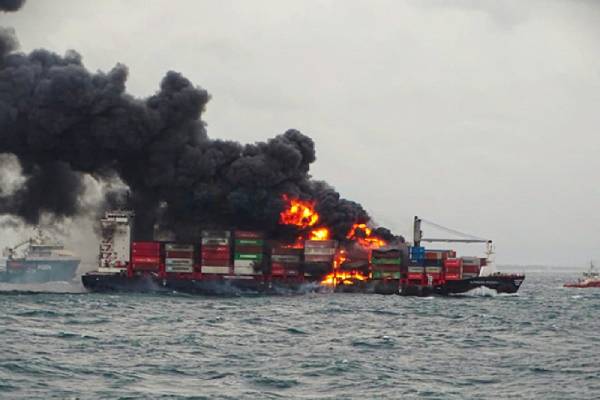 The possible total constructive loss of the X-Press Pearl stands to be the latest in a line of container ship losses for the insurance industry.

There have been two explosions on board the 2,700 twenty-foot equivalent unit-capacity container ship since it initially caught fire on 21 May at anchor near the Colombo port. The fire, which had appeared to have taken hold on most of the vessel as of 26 May, continued to burn on 28 May, according to an update from the Sri Lanka Ports Authority, although it said the blaze “has been contained considerably”.

Speaking to S&P Global Market Intelligence on 27 May, Martin Hall, Head of Marine Casualty at law firm Clyde & Co., said all signs from the event point to a “total constructive loss” even if the fire is eventually extinguished and the vessel stays afloat.

“I can’t see a situation where the vessel and its cargo [aren’t] going to be a total loss,” he said in an interview.

Insurers will face hull and machinery, cargo and liability claims, although there is still much uncertainty about the size of the loss. The vessel itself was only three months old; it is unclear how much the hull was insured for and which company insured it.

Hawes estimated that the cargo loss could be between $ 30 million and $ 50 million, based on the X-Press Pearl’s 2,700 container capacity and an assumption that a container houses an average of $ 15,000 to $ 20,000 of goods. He said he thought the loss would be spread among a “large group” of insurers in London, Europe and Asia, and that fire and explosion losses would be covered under “pretty much every cargo insurance policy that’s out there”.

Marine mutual insurer The London P&I Club, confirmed in a 26 May statement that it provides specialist marine liability cover, known as protection and indemnity, or P&I, to the X-Press Pearl. As the liability insurer, it would cover crew injuries and any environmental impact. The insurer said three crew members have suffered injuries “that are not thought to be life changing.”

The environmental impact of the blaze could have significant bearing on the size of the P&I claim. A “serious pollution incident” could lead to the claim swelling to “potential hundreds of millions” of dollars, according to Hawes, but that this would only happen if the vessel sinks.

The vessel sinking in deep water, well away from land, could be a better outcome for the P&I insurer than saving it and bringing it back into port because of the heavy clean-up costs, said Hall.

The P&I insurer could end up picking the tab for the cargo and the salvage cost. In a total loss situation, Hawes expects cargo insurers to try to recover their losses from the shipowners. The salvage team is probably working under the SCOPIC clause, which would mean they would be paid by the P&I insurer, said Hall.

Salvors are usually paid from the value of what is recovered, and the SCOPIC clause ensures they are paid adequately for recovering vessels to limit environmental impacts where vessels are so damaged that they have little commercial value.

A spokesman for The London P&I Club said in an email that the insurer would not speculate about the potential size of the claim.

The X-Press Pearl’s claim is likely to keep the persistent threat of container ship losses at the front of marine insurers’ minds. The market has already been hit this year by the grounding of the Ever Given in the Suez Canal in March. The final claims bill for that event remains under dispute.

Hawes said there were concerns about the size of the vessels, stowage plans’ impact on vessel stability, dangerous goods not being declared and crew fatigue amid pandemic-fueled staff shortages. He noted that a November 2020 article by Norwegian marine mutual Gard said there had been a container ship fire every two weeks at that point in 2020.

“It is a problem that is not going away,” said Hawes.