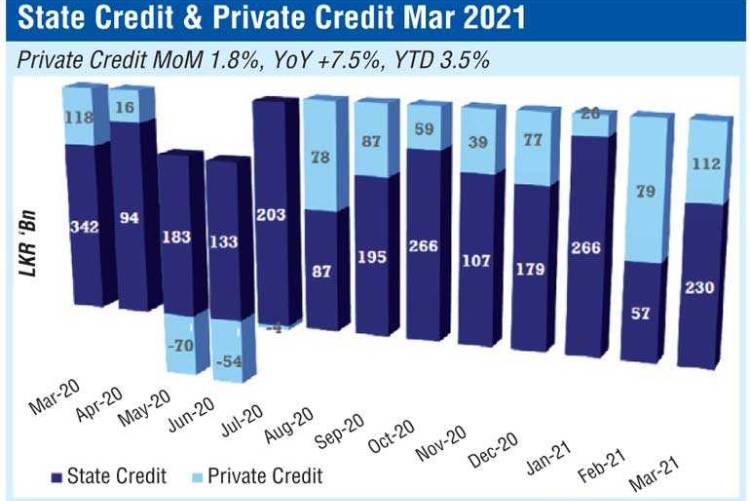 Private sector borrowing soars by record Rs. 112 b in March

First Capital said that the March figure reflected a 12-month high as well as growth for the eighth consecutive month, indicating a revival in gross loan disbursements.

It noted that the Central Bank has set a target of 14% to grow private sector credit, while the year-to-date credit growth figure of 2.57% nearly marks an achievement of one quarter of the total credit earmarked for the entire year. This is indicative that the full year target is within the reach, First Capital added. “Despite the fact that the [COVID-19] third wave may create a temporary slowdown, low interest rates are expected to be a sweetener to propel the demand for private credit in 2021,” it said.

“During the festive season, reserve money tends to expand faster but private credit may not necessarily expand commensurately. Therefore, though the reserve money expanded in April on both month-on-month and year-on-year basis, we expect the private credit growth to moderate in April,” ICRA Lanka added.

According to the 2020 Central Bank Annual Report, despite the challenging economic and business environment, banking sector growth in loans and advances improved from 5.6% in 2019 to 11.9% to Rs. 9 trillion in 2020.

Despite the freezing the classification of credit facilities under moratorium, Non-Performing Loans (NPLs) increased by Rs. 66.4 billion during 2020 compared to an increase of Rs. 118.5 billion during 2019, stemming from the challenging business environment that prevailed for a substantial period in 2020, resulting in an increase in gross NPL ratio to 4.9% by end 2020.

However, the migration of NPLs to categories requiring higher provisions had reduced the net NPL ratio during 2020. Nevertheless, the actual NPL position will only be reflected subsequent to cessation of the moratoria, which is still in effect for certain sectors of the economy.

The Central Bank also said although 73.1% of credit was mainly concentrated in six economic sectors, individual banks have diversified their businesses among various sectors in the economy. Out of the main sectors, manufacturing, wholesale and retail trade, agriculture, forestry and fishing, tourism, and construction sectors reported NPL ratios higher than the total banking sector average of 4.9% as at end 2020.