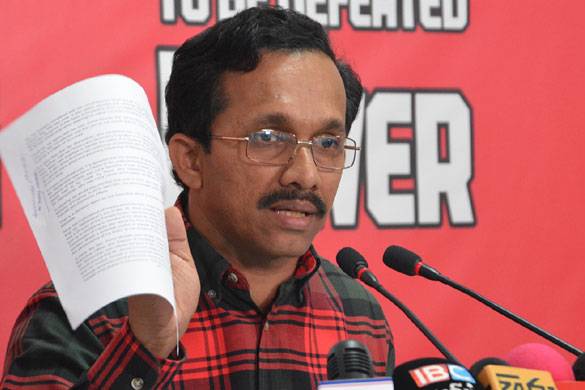 JVP to go to court against Tax Amnesty Bill

Claiming that the proposed ‘Tax Amnesty Bill’ was aiming to facilitate crooked businessmen loyal to the Government to legitimate money amassed through illegal channels, the Janatha Vimukthi Peramuna (JVP) yesterday said they were planning to go to court against this Bill.

VP MP Sunil Handunneththi told a news conference that this Bill was meant to facilitate ‘government crooks’ to invest their undisclosed earnings in legal means.

He said some ministers claimed that after Basil Rajapaksa took over as Finance Minister, he would provide relief to the people by reducing cost of living and fuel prices.“however, Basil Rajapaksa as the Finance Minster has brought in a Bill for money laundering,” he said.

Handunneththi said this was a move to legitimate money earned through illegal means by paying 1 percent tax to the government. “People can invest this money in share market before December 31. This undisclosed money can be used to purchase property, Treasury Bonds and Bills issued by the Central Bank on behalf of the government. This money can be deposited in banks before December 31. It is true that the Treasury is empty. The government is trying to legitimate illegally and fraudulently earned money by its crooks hiding behind this economic crisis,” he said.

He said the most serious aspect of this Bill is that people who had evaded payment of income tax payable to the government cannot be disclosed even through the Right to Information Act.“people have a right to know about those who have defrauded tax money. We hope to go to court against this Bill,” he said.(Daily Mirror)