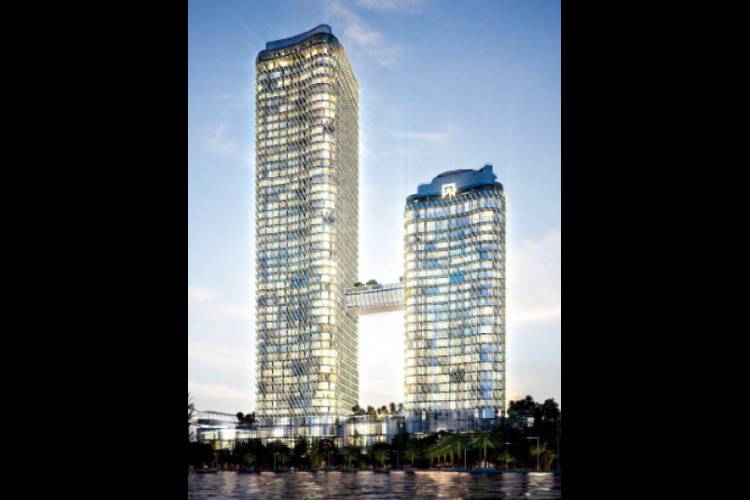 ‘Making of the Iconic Ahasa One Sky Bridge,’ a TV documentary film that takes the audience on a behind-the-scenes journey of Colombo’s newest landmark, is set to be aired on Sunday, 6 June at 8:30 p.m. on HiTV.

Colombo’s prestigious Galle Face oceanfront has been transformed forever by the construction of the eye-catching Ahasa One Sky Bridge which has been installed c.100 feet in the air and connects the Sapphire Residences with the ITC hotel towers.

Ahasa One Sky Bridge will proudly announce that Sri Lanka is ready to join the ranks of world-class global locations with exceptional engineering landmarks, setting a new architectural precedent for the entire South Asian region. This distinctive creation will be the latest in the fast-changing cityscape of Colombo and is also guaranteed to bring the capital city on par with some of the most fascinating cities in the world.

Despite its futuristic design, Ahasa One posed significant challenges to the engineers who crafted this masterpiece. This special documentary will help the audience understand the creative thinking and planning process during the design and engineering of this architectural marvel. The fascinating story of how a real estate developer’s vision of creating South Asia’s first-ever such Sky Bridge was turned into reality despite the numerous challenges faced along the way will be brought to light through the documentary.

It will also portray the importance of Ahasa One for Sri Lanka as a national architectural monument and how it stands to enhance the country’s image on the global stage. Viewers can also observe how the gigantic structure was designed, tested, transported, assembled, raised, and installed between the Sapphire Residences and ITC hotel towers over Galle Face.

On completion, Ahasa One is destined to become one of the most popular leisure destinations for Colombo’s elite, offering the city’s most breathtaking dual-panoramic views, two c.50+ metre infinity pools and sun deck on top as well as a luxurious jazz lounge and bar.