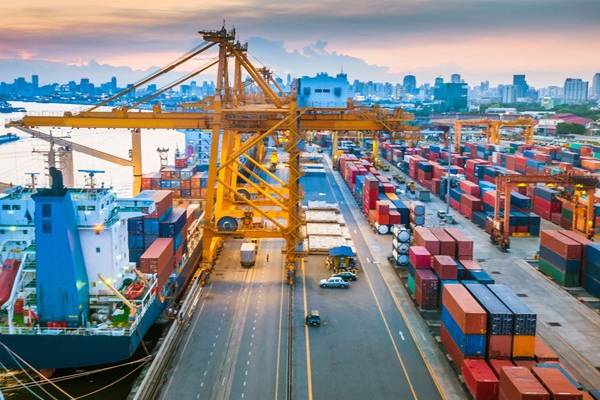 All three terminals at the Colombo Port came to a standstill yesterday, suffering over 50% loss of revenue and productivity, after a coalition of 23 trade unions began an indefinite protest urging the Government to hand over the running of the East Colombo Terminal (ECT) to the Sri Lanka Ports Authority (SLPA).

The trade unions blocked access roads inside the Port and plan to continue the action until the Government responds to their requests.

The trade union action came a week after the coalition of unions delivered a letter requesting President Gotabaya Rajapaksa to intervene in the matter and prevent the terminal being handed over to India. They had demanded an immediate audience with the President, who was busy on the campaign trail for next week’s General Elections.

Colombo Port on average handles 45,000 TEUs per day, and sources said that the industrial action from noon yesterday crippled revenue and productivity by over 50%, whilst tarnishing the image of the most competitive and reliable hub port in South Asia. The strike also coincided with the long weekend, causing serious concerns among exporters who are defying the global COVID-19 pandemic odds to boost much-needed foreign exchange for the country.

The group also previously met Prime Minister Mahinda Rajapaksa and discussed their demands of seeking authorisation to unload and fix three gantry cranes imported from China for the terminal.

The Government authorised the unloading of the cranes, which are now fixed and awaiting to be operationalised. However, the Ports Ministry and the Government has been reluctant to allow the SLPA personnel to commence operations with the cranes, citing an agreement signed by the previous government with Indian and Japanese stakeholders to build and operate the terminal

“Our collective trade unions began our peaceful protest to urge the Government not to allow vital infrastructure to be sold off to foreign entities. Our action has slowed down operations and the Port is now at a standstill,” Port Trade Union activist and Progressive Workers Association for Commercial Industry and Services (PWACIS) Secretary Sharmal Sumanarathna told Daily FT.

The trade unions state that they have not had a response from the President, and blame the Government for stalling and caving in to international pressure.

“We have closed off several roads, the entire Port has come to a halt with both private terminals also unable to operate. We will continue till the Government talks to us about what they are going to do about the ECT. We won’t stop till we have answers,” Sri Lanka Freedom Party Port Workers Association (SLFPPWA) Chairman Prasanna Kalutharage said.

After the initial protests earlier this month, the President also appointed a committee to look into the issues of both the ECT and State-run Jaya Container Terminal (JCT) and make recommendations within 45 days.

In May 2019, the former Government entered into a tri-partite Memorandum of Understanding (MoU) with Japan and India to build the ECT. Under that agreement Japan was to provide a loan of $ 500 million and India was to do the construction.

The agreement was signed during the tenure of former Ports Minister Sagala Ratnayaka. However, former Ports Minister Mahinda Samarasinghe, who held the portfolio before Ratnayaka, and former President Maithripala Sirisena had earlier promised the SLPA trade unions that the ECT will be built and operated by the SLPA.

The unions contend that if the ECT is given to a foreign company, then the SLPA will not have a deep water terminal capable of berthing large ships, and will eventually lose out to the other two privately-operated terminals.

Colombo International Container Terminal (CICT) is currently operated by a Chinese company and the South Asia Gateway Terminal is run by conglomerate John Keells Holdings. Jaya Container Terminal, which is the oldest of the three terminals currently under operation, is not deep enough to compete with the other two terminals. Shipping experts have long warned that the much-delayed ECT was urgently needed to keep the Colombo Port competitive and continue its hub status in South Asia. But efforts to make it operational since 2015 have largely failed to take off.