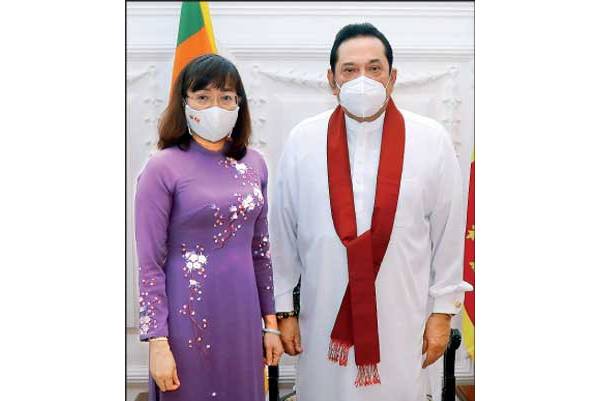 The Ambassador foresees many opportunities for Sri Lanka and Vietnam to enhance bilateral relations in the coming years.

She said there is much potential to attract investments from Vietnam to Sri Lanka. In 2019, the trade volume between the two countries stood at approximately $ 300 million. The Vietnam Ambassador assumed duties in Sri Lanka in March.

In addition to investments, the Ambassador also stressed her country’s interest in furthering Buddhist relations between Sri Lanka and Vietnam.

Prime Minister Rajapaksa agreed that, given the historical Buddhist heritage of both countries, enhancing these ties could greatly benefit the people-to-people links between Sri Lanka and Vietnam.

The Ambassador said that the Vietnamese Embassy was already working with Haritha TV on exchanging Buddhist programming. Other related ideas focused on establishing a Vietnamese Buddhist temple in Sri Lanka and the exchange of students and religious leaders between the two countries. Currently, there are approximately 100 Vietnamese Buddhist monks studying in Sri Lanka.

The Prime Minister and the Ambassador also discussed improving parliamentary relations between the two countries, through activities such as exchange visits of parliamentarians and continuing the ongoing cooperation at multilateral fora.

Birth certificates to be issued with unique ID number