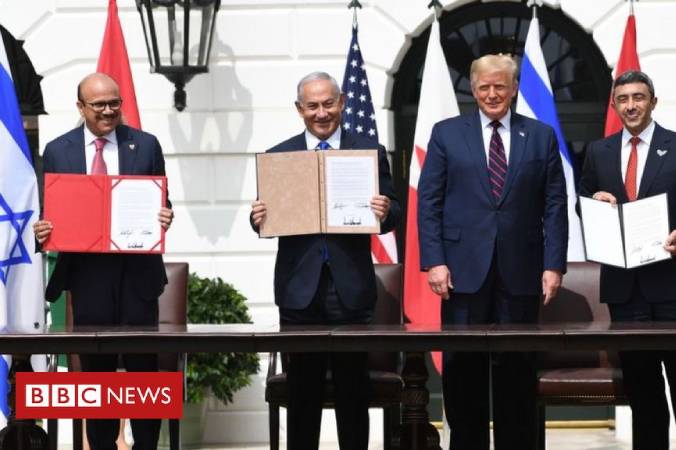 US President Donald Trump has hailed the "dawn of a new Middle East", amid Israel's landmark deals with the United Arab Emirates (UAE) and Bahrain.

Mr Trump spoke as the two Gulf states signed agreements fully normalising their relations with Israel.
The three countries hailed the deals as historic, as did Mr Trump, whose administration helped broker them.
The Gulf states are just the third and fourth Arab countries to recognise Israel since its founding in 1948.
Mr Trump hopes other countries will follow suit, but the Palestinians have urged them not to while their conflict remains unresolved.
For decades, most Arab states have boycotted Israel, insisting they would only establish ties after Israel's dispute with the Palestinian was settled.

What does Trump's Mid-East plan say on key issues?
"After decades of division and conflict we mark the dawn of a new Middle East," Mr Trump told a crowd of hundreds gathered at the White House on Tuesday.
"We're here this afternoon to change the course of history," he added.

Israeli Prime Minister Benjamin Netanyahu welcomed the deals, saying, "This day is a pivot of history; it heralds a new dawn of peace."
But Palestinian leader Mahmoud Abbas said only an Israeli withdrawal from occupied territories could bring peace to the Middle East.
"Peace, security and stability will not be achieved in the region until the Israeli occupation ends," he said in a statement after the signing of the deals, AFP news agency reports.
The Israeli army said that two rockets were fired from the Gaza Strip into Israel while the ceremony was under way.