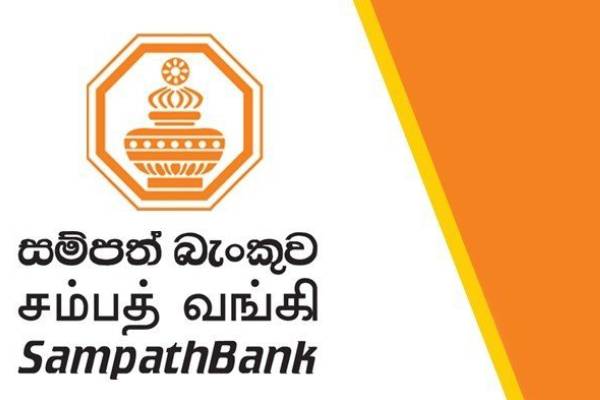 1Q sees strong NIM on the back of rising AWPLR
Solid 248% growth in exchange income stemming from sharp depreciation of rupee against dollar by 47%
Sizable 74.6% increase in net fee and commission income during the period, driven by cards and trade-related operations
Higher impairment provision on loans and investments to capture possible economic uncertainties
Marginal drop in Group PAT (4.9%) while PBT recorded a slight growth of 1.6%
Group’s PBT and PAT for Q1 2022 was Rs. 6.8 b and Rs. 4.9 b respectively

Backed by its solid capital base and prudent risk fundamentals, Sampath Bank said it continues to prove that it is well equipped to navigate the challenging economic environment.

Having sufficient capital buffers to absorb significant losses arising by reason of the prevailing stressful economic conditions, the bank’s well-diversified investment portfolio coupled with its increased vigilance and proactive risk management measures have enabled Sampath Bank to remain resilient and prioritise stakeholder interests above all other interests in the context of negative economic headwinds.

Notwithstanding the extremely challenging economic conditions which prevailed, Sampath Bank registered a profit before tax (PBT) of Rs. 6.5 billion and a profit after tax (PAT) of Rs. 4.7 billion for the three months ended 31 March, indicating marginal growth of 5.3% and 2.9% respectively from the figures reported in Q1 2021 despite having taken in a substantial impairment provision on loans and investments.

Sampath Bank recorded a total interest income of Rs. 24.9 billion in Q1 2022 compared to Rs. 20.7 billion for the corresponding period in the previous year, reflecting a 20% growth year-on-year.

The increase is attributed to the higher interest income from loans and investments resulting from the upward trend in interest rates in Q1 2022 compared to the corresponding period in the previous year. AWPLR increased by 396 bps from 5.75% reported on 31 March 2021 to 9.71% reported at the end of the reporting period. Meanwhile, one-year Treasury bill rate increased by 717 bps from 5.11% reported at the end of the corresponding period.

Despite the interest rate hikes observed in recent months, Sampath Bank was able to benefit from lower cost of funds thanks to the higher concentration of CASA in its deposit portfolio. As a result, the bank recorded a marginal drop of 1.6% in interest expenses during Q1 2022 compared to the first quarter of 2021.

The bank’s interest expenses for the first three months of 2022 was Rs. 11.3 billion compared to Rs. 11.5 billion reported for the same period in the previous year. Net interest income increased by 47% in the first quarter of 2022 as a result of the aforementioned factors. Net interest Margin also reported at 4.54%, a healthy growth of 93 bps compared to the figures reported at the end of 2021.

Sampath Bank reported a strong increase in Net fee and commission income (NFCI) in Q1 2022 over the figure tabled in the corresponding period of the previous year. NFCI comprises income from various sources such as loans and advances, credit cards, trade, and electronic channels.

The Significant growth recorded during Q1 2022 was attributed to the higher volumes generated from card related business and an increase in the fee and commission income derived from trade-related activities.

Net other operating income also increased significantly by 223% in the first quarter of 2022 compared to the corresponding period in the previous year. This was the result of higher realised exchange income attributed to the sharp depreciation of the rupee against the dollar by 47%.

During the first three months of 2022, the bank recorded Rs. 8.7 billion as net other operating income compared to Rs. 2.7 billion reported in Q1 2021. The bank recorded a net trading loss of Rs. 381 million for the period under review, compared to the Rs. 398 million incurred in the corresponding period of the previous financial year. On this basis, the bank’s net exchange income from foreign exchange transactions amounted to Rs. 8 billion for the period under review.

These impairment models use probability weightages to consider the dominant economic scenarios in the local and global context in order to assist the bank in determining the appropriate amount of loan loss allowance for a given reporting period. On this basis, the bank increased the weightages for worst-case economic scenarios by considering the recent shifts in the country’s economic outlook and used the latest economic data in the calculation of the impairment allowance for Q1 2022.

Furthermore, the bank also re-assessed the credit risk profile of customers vis-a-vis under the current economic context and increased impairment provisions accordingly. The bank also pushed the customers to stage 2 from stage 1 based on their ability to withstand the economic uncertainties, including those customers operating in elevated risk industries. Meanwhile, the bank continues to recognise the allowance for overlay against the customers who came out from the 4th phase of the COVID-19 related moratorium in December 2021.

Due to the factors mentioned above, the Q1 2022 impairment charge against loans and advances stood at Rs. 4.9 billion compared to Rs. 1 billion recorded in the first three months of 2021, indicating a 404% increase year-on-year.

Impairment charge on other financial instruments: During Q1 2022, the bank has recognised Rs. 6.3 billion of impairment provision against the foreign currency denominated government instruments. This decision was prompted by two reasons; the downgrade of Sri Lanka’s sovereign rating in April and the announcement by the Government of Sri Lanka that it is considering a consensual restructuring of the country’s external debts through an economic adjustment program supported by the IMF.

The change in the total capital ratio during the reporting period is on account of the increase in risk-weighted assets and the distribution of retained earnings to pay cash dividend worth of Rs. 4,864 billion.

The bank is well positioned to maintain its capital ratios at prudent levels with sufficient buffers to absorb the shocks that may arise from economic uncertainties.

Total Advances grew by 34.6% (annualised) in the first three months of 2022 to reach Rs. 883 billion at the end of the reporting period from the Rs. 813 billion reported at the end December 2021. Rupee loan book grew by 15.5% (annualised) during the period.

However, the local currency converted value of foreign currency-denominated loans increased significantly following the depreciation of rupee against dollar during the month of March. If the exchange rate fluctuation is excluded, the bank would have achieved a growth of 12.3% (annualised) for total loans and advances during the period.

The shareholders of the bank at the Annual General Meeting held on 30 March approved a first and final Cash Dividend of Rs. 4.25 per share for the financial year 2021. The bank had made a provision of Rs. 4,864 million for the approved final dividend in its Financial Statements as at 31 March. The bank paid the respective dividend in April.