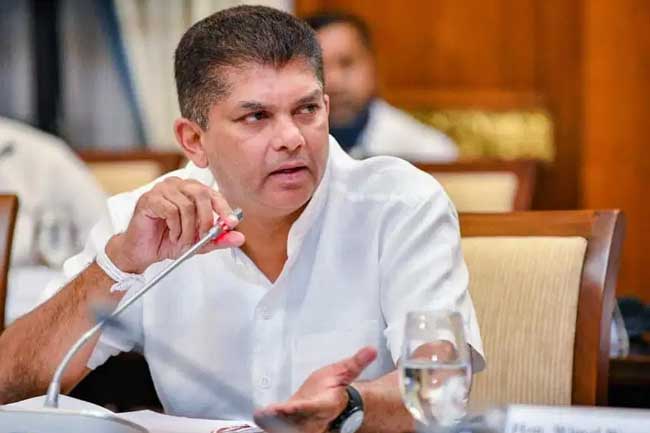 ’’I stopped the prisons from burning. Am I stupid to threaten the prisoners?’’

State Minister of Gem and Jewelry Related Industries Lohan Ratwatte who has pushed the government into a hot soup over allegations that he threatened a group of Tamil prisoners over the weekend, yesterday denied all accusations leveled against him saying he was ‘not stupid’ to resort to such action.

Breaking his silence for the first time since being forced to resign as the State Minister of Prison Reforms and Prisoners Rehabilitation, Ratwatte told Daily Mirror that he had not threatened the prisoners at the Anuradhapura Prison and had in fact visited the prison on a routine check only.

However, Ratwatte accepted that he had visited the gallows at the Welikada Prison but that too was for a routine check and denied allegations that he was intoxicated or visited the gallows with his friends including a female accomplice. He said he was alone.

“As a minister, I can walk into any prison at any time. I do not need anyone’s permission. I had 29 prisons and two rehabilitation centers under me and I could walk into them at any time, day or night. I would do this without informing anyone because I really wanted to know what was happening inside,” ratwatte said.

Explaining himself over the allegations, which earned the government a blow even on the international front, Ratwatte said he took over the prison system at a time when the prisons were burning. “i changed the whole prison system. I stopped all the drug dealings.

I stopped all the gang murders that were happening from inside. I put them all in a separate area, which I cannot tell you for security reasons.

And normally they smuggle in phones and other gadgets. I stopped all that. I stopped all the drugs going in.these allegations against me now are all false. Over the weekend I went to the Anuradhapura Prison only to check as I did with the other prisons. I never broke in and I never threatened any prisoner. That is not my job. That is not me,” Ratwatte said.

He further said that when he was appointed as the Minister of Prisons Management, the prisons were burning with all illegal activities. He said within these past few months, he put these fires out and turned the prisons into rehabilitation centers.“i had even made plans to shift the Welikada Prison to Horana.that will be a state-of-the-art prison and I changed the name from a ‘prison’ to a ‘correctional facility.’ I changed this entire system and after all that do you think I will do a stupid thing like this?,” Ratwatte asked.

The Minister reiterated that he never took anyone to see the gallows inside Welikada Prison but he went alone for an inspection visit. He further said he visited the Anuradhapura Prison on Sunday but had not even touched the prisoners as alleged. “Nothing like that ever happened.this is absolutely false,” Ratwatte said.

Ratwatte who now faces pressure over the allegations with several parties calling for his arrest says it is now up to the President and Prime Minister to realize the truth and added he will continue his duties and work as the State Minister of Gem and Jewellery Related Industries.(Daily Mirror)