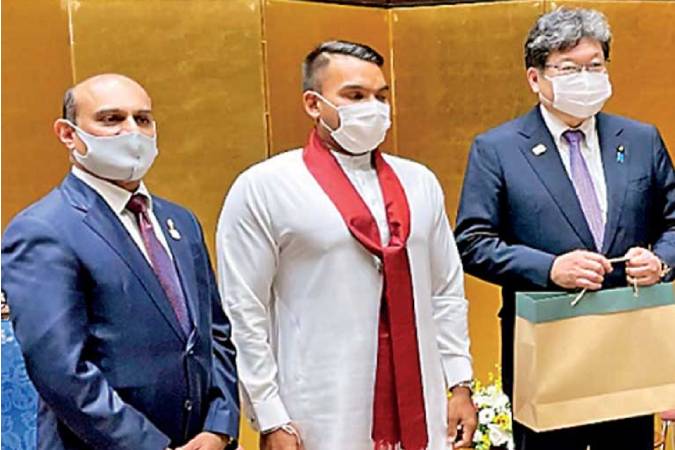 The Sports Minister had studied the Japanese rugby and sports structure at the club level and mentioned Sri Lanka was following a similar structure under his purview. He also requested more sports scholarships and student exchange program between Sri Lanka and Japan.

The Japanese Sports Minister committed his Ministry to consider and increase sports scholarships similar to one that had just been extended to our Olympic rhythmic Gymnast Milka Gehani.

The two Ministers discussed the importance of technology and the necessity of introducing technology at the Secondary and Tertiary level. Minister Hagiuda agreed to exchange Japanese Technical Education systems of education at high school and tertiary level with Sri Lanka and the Ambassador agreed to follow up and coordinate with the relevant ministry officials.

As the minister responsible for technology, the Minister also discussed extending JAICA funding for introducing digital television in Sri Lanka and the current administration being positive on promoting digital TV in Sri Lanka.

Rajapaksa stated that Sri Lanka’s beautiful beaches and strategic ports would be used only for commercially viable projects which promote peace. The Japanese Minister and his entire delegation was very appreciative of the Minister’s comments.

During the visit, the Minister also met former Japanese Prime Minister Yasuo Fukuda and former Japanese Ambassador to Sri Lanka Kenichi Suganuma, the current President of the Japan-Sri Lanka Association. Minister Rajapaksa and the Ambassador also had a special meeting with Shinpei Matsushita, a Member of Parliament in charge of Overseas Development Assistance (ODA) to seek further support from Japanese ODA.

Rajapaksa made a courtesy call to former Peace Envoy and Ambassador to Sri Lanka Yasushi Akashi at his office.